Writers In A Surveillance Society . . . 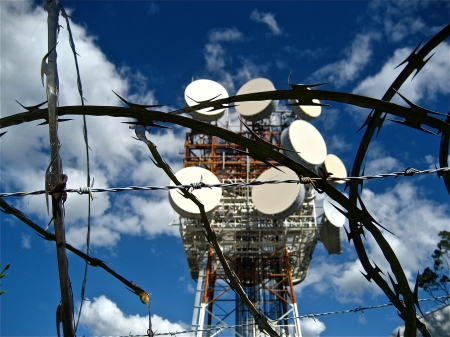 PEN, which is international, “…has two distinct yet complementary aims: to promote a literary culture and to protect freedom of expression.”

A recent article in The New York Times, Writers Say They Feel Censored by Surveillance, begins with:

“A survey of writers around the world by the PEN American Center has found that a significant majority said they were deeply concerned with government surveillance, with many reporting that they have avoided, or have considered avoiding, controversial topics in their work or in personal communications as a result.”

PEN surveyed “…fiction and nonfiction writers and related professionals, including translators and editors, in 50 countries.”

The executive director of the PEN American Center said, “Writers are the ones who experience encroachments on freedom of expression most acutely, or first….The idea that we are seeing some similar patterns in free countries to those we’ve traditionally associated with unfree countries is pretty distressing.”

Naturally, the results of the survey were roundly criticized and painted as “overblown”…

Yet, writers may be serving as the canaries in the mine of surveillance activities…

“Just the fact that so many writers say they are deeply concerned and are actually changing their behavior is significant….Whether we consider it justified or not, it isn’t something that should be ignored.”

What are your thoughts and feelings?

Are writers dangerous to governments?

Is that such a bad thing?

If you live in a relativity “free” country, do you think writers are under surveillance?

If you do think this is happening, do you think all writers respond the same?

Do you have any stories to share about writers who didn’t let surveillance shut them up?

Think there could be more subtle damage to a writer’s life, even if the surveillance hasn’t led to writers being arrested—pulling back on writing about certain topics—writing to please the masters?

You can read PEN’s survey results…

Can You Talk Back To A Famous Author?

I barely scratched the surface on this topic back in September in the post, The “Self”-Education of Writers . . .

I thought of putting a few more snippets from the article here but then saw a thread on Google Plus about it.

So to get you in the mood to either agree with Kurt or argue with him, I’ll put a few of the comments from that thread here:

Brian Meeks 19:33
I loved that article! Thanks so much for posting it. I live near, and work (occasionally) in Iowa City. That may be part of why I liked the article, but mostly I just enjoyed…what else…the writing.
I especially enjoyed the bit about poetry writers v. prose writers.
Great find!

William Morton 19:49
KV’s essay is flawed from the first line forward. I would reference the work of Betty Edwards. KV was a cranky old fart. People can be learnt to write better.

Amy Knepper 20:15
to Monika Ullian — Considering I married a preacher and I’m approaching middle life, there were several points I thought were jaded and condescending. I got a chuckle out of it though. At least I can recognize it (and my local writers guild is full of the same combination of people).

Torah Cottrill 21:39
Best quote: The idea of a conference for prose writes is an absurdity. They don’t confer, can’t confer. It’s all they can do to drag themselves past one another like great, wounded bears.

Check out the thread on G+ for more… [Edit: since I first wrote this the thread responses have grown :-) ]

What Does It Really Mean To Be A “Bestselling” Author?

Everything about the Book-World is in dizzying transformation.

So, what is a bestselling author?

That was just a partial list plus we can learn more from Kailin Gow in her post on FastCompany called, What Being A “Bestselling Author” Really Means.

Like many posts with imposing titles (including this one), Gow’s falls short of full description but does do a good job of comparing the NYT list with Amazon’s.

Concerning her own bestselling status on Amazon, she says:

“…my books, because of the rankings they received at one point on Amazon, were popular enough to be on the bestseller list. For a book to rank #300 on the overall Amazon ranking means that, out of over 1 million books on Amazon, only 299 sold more copies.”

“No one knows exactly how this is compiled, but large publishers know certain things about getting onto the list, and that’s why you find many of the large publishers’ books on there. It is a well-known fact among publishers that the New York Times gets its book sales data from a scattered few bookstores (like the Nielsen’s) and it doesn’t take into account the actual sales of the books (which Amazon.com does in order to rank), but how many books were shipped to these particular sampling of stores in anticipation of sales….

“Does being on Amazon.com’s bestselling list actually mean you are selling more than being on a New York Times list?

“In some cases, yes. It boils down to Actual Sales (Amazon.com) vs. Anticipated Sales from select bookstores (New York Times).”

So, if you’re an author, would you rather be a Bestseller because a few, select, bookstores did well with your book or because more readers chose you from a much larger collection of books?

Also, if you are an author, is it important for you to be a “bestseller”?

Would you be happy selling moderately to a diverse audience?

Who Tells You What To Read?

“Nobody tells me what to read. I make my own decisions.”

Sure, so do I, but how do I know about the books so I can choose from the selection?

Of course, the traditional production of books has agents, editors, and marketing folks making decisions before you get a selection of books from which to choose.

And now, there are also self-published authors being enabled to add to the possible choices…

So, who “helps” you decide what to read?

Just you, prowling the swiftly-vanishing bookstores?

And, how about Amazon eliminating the agents, editors, and marketing folks?

In a recent article in the The New York Times, Amazon Signs Up Authors, Writing Publishers Out of Deal, we have this:

“’Everyone’s afraid of Amazon’, said Richard Curtis, a longtime agent who is also an e-book publisher. ‘If you’re a bookstore, Amazon has been in competition with you for some time. If you’re a publisher, one day you wake up and Amazon is competing with you too. And if you’re an agent, Amazon may be stealing your lunch because it is offering authors the opportunity to publish directly and cut you out.'”

From Dystel & Goderich, a literary agency, in their article, “Moneyball, Amazon and the end of publishing as we know it”, we have:

“In this week’s death watch, the publishing business is going the way of the Edsel.  E-books have won.  Traditional publishers don’t know what to do with themselves or their lists.

“Agents are unnecessary.  Anarchy reigns among authors.   And, oh, yeah, Amazon is getting closer to world domination (tricky bastards).  There is no leadership.  The darkness is encroaching.  The center cannot hold!”

And, in an article from The Atlantic, What Would Happen if Amazon Ruled Publishing?, we have:

“When one company holds the keys to the kingdom for what content consumers can see on its device, it has a lot of power as to what kind of information reaches people. For example, Apple can kill off an app that criticizes Apple. If Amazon consolidates its power in the publishing industry, what would become of a book criticizing Amazon?”

Is it going to be Amazon (plus a possible few other, smaller giants) “keeping the gate” between the Author and Reader?

I imagine, even with the outlandish success of ebooks, Amazon would still publish ink on paper… Maybe?

Literary Theory ~ Is It Worth Anything?

I’ve been having a certain book thrust into my awareness, repeatedly, from many directions lately.

The latest appearance was in an article about literary theory—oh, my, fiction can teach us enduring truths? Really??

In a post I wrote back in March, World Crises And Fiction Writers ~ Can They Help Humanity?, I posed a number of questions. Here are a few of them:

* Is fiction a proper tool for purposely proposing solutions to world crises?

* Does it go against some “law” of creativity to ask writers to make their fiction conform to some response to world conditions?

* What is the role in society of the fiction writer?

So, this last thrusting of a certain book into my awareness happened in the New York Times Opinion piece, ‘Quixote,’ Colbert and the Reality of Fiction, by William Egginton.

In response to an argument that “naturalism”, the theory that science is the only way to real truth, is a better guide to life than literary theory, he said:

“As a literary theorist, I suppose I could take umbrage at the claim that my own discipline, while fun, doesn’t rise to the level of knowledge. But what I’d actually like to argue goes a little further. Not only can literary theory (along with art criticism, sociology, and yes, non-naturalistic philosophy) produce knowledge of an important and even fundamental nature, but fiction itself, so breezily dismissed in Professor Rosenberg’s assertions, has played a profound role in creating the very idea of reality that naturalism seeks to describe.”

I do recommend you read the full article…

It does require more than average reading concentration but it’s not rocket science :-)

What was the book that kept thrusting itself at me—the one I now have two copies of on my computer’s desktop?

The book that I really want to read because of the previous glowing recommendations and this most recent use as an example of literature that informs us about truths?

The one I’m having extreme planning sessions with myself about; like where I’ll find the time to read it?

“…Cervantes created the world’s first bestseller, a novel that, in the words of the great critic Harold Bloom, ‘contains within itself all the novels that have followed in its sublime wake’.”

He even goes further and says:

“…in writing those volumes Cervantes did something even more profound: he crystallized in prose a confluence of changes in how people in early modern Europe understood themselves and the world around them. What he passed down to those who would write in his wake, then, was not merely a new genre but an implicit worldview that would infiltrate every aspect of social life: fiction.”