When Two Books Depend On Each Other . . .

If you been following this blog, you know I’m working on another novel; and, that the new book happens in the same worlds and time-frame as the one I published back in 2011 (get a free copy here…)

I’ve just finished a read-through of Notes from An Alien (the first book), while taking notes to help me mesh the new plot with the older one; and, I must admit, reading a book I wrote four years ago was an enlightening experience…

I found only two typos (though eight were found shortly after publishing…) and there are only two other small corrections I’m going to make.

I also have thousands of words in other notes that I need to read for the third time; then, on to the planning and organization of the plot for Finally, The Story Can Be Told…

Once I have a clean-draft, I’ll be wanting a few Beta-readers…

Once I’ve published the new book, I’ll be getting back to more regular blogging—probably, Monday, Wednesday, and Friday…

Leave a comment Posted by Alexander M Zoltai on April 27, 2015 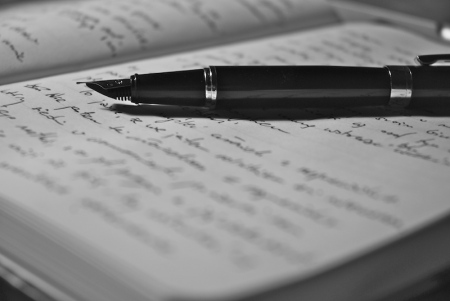 Preparatory reading and note-taking are finished…

I’m reading my last book (for the first time in four years) and appreciating what I did, while I take yet more notes (leading to a working outline)…

Mind you, it had taken me quite a long time to write Notes from An Alien so it better be good :-)

This next book should be done next year (early?) and, near the end of this year, I’ll be looking for a few Beta-Readers for Finally, The Story Can Be Told…

As I’ve mentioned here before, I’m re-reading Notes to make sure Finally is “congruent” with it—they happen in the same universe and time-frame, with mostly new characters, and a different way of narrating…

If Notes is a documentary novel, Finally will be full-on Speculative Fiction…

Might as well mention, for anyone reading this who is just beginning their writing-journey, the work of authoring a book is totally Weird.

Just to nail down what I mean here’s weird’s etymology:

“The sense ‘uncanny, supernatural’ developed from Middle English use of weird sisters for the three fates or Norns (in Germanic mythology), the goddesses who controlled human destiny. They were portrayed as odd or frightening in appearance, as in ‘Macbeth’ (and especially in 18th and 19th century productions of it), which led to the adjectival meaning ‘odd-looking, uncanny’ (1815); ‘odd, strange, disturbingly different’ (1820). Related: Weirdly; weirdness.”

And, don’t forget, you can download a free copy of Notes from An Alien…

Like Loading...
Uncategorized Documentary Novel, etymology, Finally The Story Can Be Told, Notes from An Alien, Reading My Own Book, Reading Your Own Book, Sequels, Speculative fiction

Have You Read Any #VisionaryFiction ?

Yesterday, I wrote about Visionary Fiction; but, mostly, from the perspective of the writer.

Today, I’ll look at it from the reader’s perspective.

Let’s look again at the qualities of Visionary Fiction:

Have you ever read a book that does those things?

Was it classified as some particular genre?

Margaret Duarte, one of the Editors with the Visionary Fiction Alliance, has a compelling argument in her post, What Is Visionary Fiction?, that makes VF a Sub-genre of Speculative Fiction (and, there’s a really cool genre-graphic).

“Visionary is a tone as well as a genre. The ‘visionary’ element can technically be present in any genre and set in any time.”

So, with no intention of setting up a controversy (since questions of genre can be highly colored by many personal factors), I’ll make the bold statement that Visionary Fiction is a “Supra-genre”…

Let’s look at some examples of VF, from the VFA site, and ask ourselves what other genres they also belong to:

Chocolate and The Girl with No Shadow  – Joanne Harris

From the Corner of His Eye – Dean Koontz

Illusions: The Adventures of a Reluctant Messiah – Robert Bach

The Journeys of Socrates – Dan Millman

No Retreat, No Surrender – Corey Yuen

What Dreams May Come – Richard Matheson

So, are those books Visionary Fiction first, then some other genre?

Some other genre, then VF?

Both at the same time?

See how slippery genre can be? :-)

Still, I think Visionary Fiction is a valuable Quality to consider when a reader’s tastes crave Universal Themes, Growth of Consciousness, and Metaphysical Plot Devices.

And, even though science fiction doesn’t have to have accurate science (since it’s fiction), many sci-fi writers strive to keep most of their science authentic or at least “plausible”…

So, where do they go to get it right?

If writers use mainstream scientists as their expert resource, they will probably not have True science.

Basically, I’m saying that most mainstream scientists are not using the Scientific Method.

If you’ve ever encountered an expert—even a world-renowned one—yet known they were full of it, you might understand my saying that mainstream science can, often, be dead wrong.

For instance, the word Cosmology, defined in my Oxford dictionary as:

“the science of the origin and development of the universe. Modern cosmology is dominated by the Big Bang theory, which brings together observational astronomy and particle physics. ”

First off, the Big Bang theory has no Scientific validity.

Also, if you check the etymology of the word,
“mid 17th century: from French cosmologie or modern Latin cosmologia, from Greek kosmos ‘order or world’ + -logia ‘discourse'”,
you see cosmology as a discourse about the world.

You may not be aware of the fact, but mainstream cosmology discourses about many things yet never broaches a conversation about you and me…

Why have humans been left out of cosmology?

Perhaps for the same reason mainstream scientists believe the universe began by exploding from Nowhere?

There are certain scientists questioning the egregious fantasies that parade themselves as science.

Michael Clarage is one of them.

I urge you, even if you don’t try to have proper science in your writing, to take the next 18 minutes and listen to this man make some Eminent Sense ( he’s not that hard to understand :-)