Starting up a New Conversation . . .

Leave a comment Posted by Alexander M Zoltai on March 12, 2018

So, last Wednesday, the progressing conversation on this blog fizzled…

Way back in January of 2011, I began this blog in anticipation of launching my first novel, which happened in May of that year.

I should mention, for those who haven’t been regulars here, that I’m a strong supporter of self-publishing…

It was only recently that I found an approach to book promotion that I felt captured everything I could get behind—7 years after I wished I’d found it… (but, I’ll still be offering my writing for free…)

Changing one of the aims of this blog, from reporting on what other blogs had to say to having conversations with my readers, was firmly decided after I discovered that book promotion approach—Be the Gateway: A Practical Guide to Sharing Your Creative Work and Engaging an Audience.

So, my attempt to re-ignite the Conversation here is to bring up and shoot down a few ideas about book promotion:

Do you buy your friends? Is the only way to make friends to buy ads and hope a future friend reads it? Even if you don’t think of future readers as friends, should you buy your readers? If you’re not like me, you may actually want your readers to buy your book…

Spread the Word on Social Media

I fought against social media early on, experimented a bit along the way, and now use two channels to share others’ posts and one to share my own ideas. I first saw authors using social media as a bunch of drunk folks standing on the bar’s tables shouting at each other… Now, I know they’re still out there; but, I’ve found there are a growing group of writers who share interesting ideas that lead folks to their blogs where they share more interesting ideas and where they have information on their books… There are some who do the right thing on social media; but, then, when you get to their blog, they’re up on their own table shouting at you about their books…

Make Friends, through Social Media and/or a Blog, Then Share Your Ideas with Them, the Things That Make You Write, Your Truths; And, Let Them Spread the Word about You…

Not gonna shoot that one down…

Do you have some book promotion ideas or methods that I haven’t mentioned?

Do you totally hate the necessity of book promotion?

Are you afraid of it?

Leave a comment Posted by Alexander M Zoltai on June 10, 2016 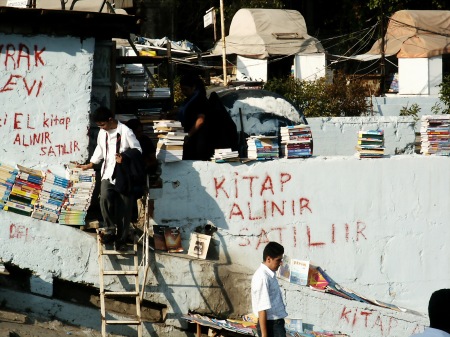 And, a month after that post I published one about self-published authors getting their books into bookstores…

There’s an article in The Independent (out of the state of Utah in the USA) called Eight Things Booksellers would like Self-published Authors to Know.

I’ll give you her eight topics and my immediate thoughts, leaving it to you to go read what an actual bookseller says :-)

My current publishing set-up would have me ordering books for the bookstore (getting them an initial discount).

Make sure your title is returnable, specifically for national bookstore chains

The books would be returned to me; but, I could certainly find new homes for them…

I probably wouldn’t have a signing event unless the store was very local.

Take an active role in your signing event

This one’s interesting because of what a commenter said—“I’ve had no trouble pricing my paperbacks within the range mentioned.”

Booksellers don’t want to be hassled about your book

You are not entitled to an audience

I wasn’t raised in the age of entitlement…

I’ll close with something Niki said that should spur any self-published author looking to get their books into bookstores off on a research spree:

“To be successful in pitching their books to booksellers, self-published authors should have a sense of the resources available to booksellers, what is appealing to them, and how to approach them.”

Since I write my blog to help folks explore Reading, Writing, and Publishing; and, since Amazon has been getting way too much press lately, I decided I should write about bookstores :-) 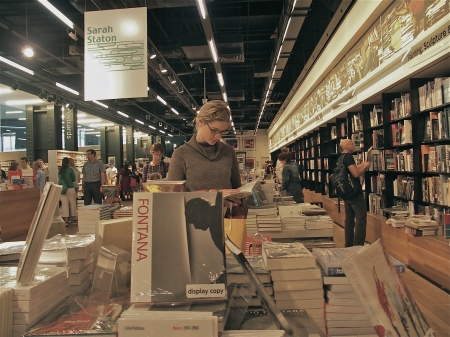 I also wanted to use a Web app I’ve been exploring—Buzzsumo.

Here’s one user’s description of this app:

“Identify the links that are most shared on social networks, as well as influencers for specific topics. .. really easy to use.”

So, I put in “bookstores” and added the filter for the past 6 months.

I’ll only give the total shares across all those platforms.

And, I’ll have a question for you at the end…

Here are the 10 most-shared Web articles about bookstores in the last 6 months (with the total number of shares):

6. One NYC Indie Bookstore Survives By Being Small And Specialized — 15,572

So, my question for you is:

Two Words Left Out of Most of The Book World’s News . . .

So much news about e-books, traditional publishers, and Amazon—so little about Libraries and Bookstores… 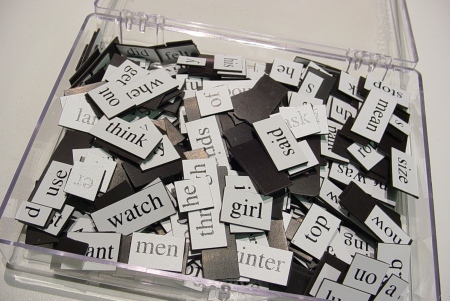 It can seem like words, no matter how well strung together, are just some commodity—market them aggressively—package ’em up and ship ’em out…

And, even though libraries and bookstores are attempting to integrate e-books into their offerings, more creativity and commitment are necessary…

I’ve posted quite a bit about e-books and libraries—not so much about bookstores; though, “Weird Things Customers Say in Bookstores” is probably worth a read :-)

So, what do you think or feel about bookstores and libraries?

Do you still use them?

Do you think they’ll disappear?

I found two articles about e-books and libraries that are not focused on the U.S.A.:

“The right to e-read”is a Europe-wide campaign

Do you think libraries should have as much access to e-books as the retailers have?

I also found a fascinating article about bookstores—Let’s Reinvent The Bookshop.

One telling excerpt from that article—“Curious to explore this territory, we asked four leading architecture and design practices to create a shop. Specifically, in the age of Amazon and e-books, a bookshop to save bookshops.”

Do you think all brick-and-mortar bookstores will disappear?

Do you think bookstores can save themselves by integrating e-books?

When’s the last time you visited a bookstore?

Would you be happy if they all went away?

It’s always a gamble trying to predict the future; though, there’s nothing wrong with holding a vision of the future and working hard to bring it into reality…

Are we doomed to a future that’s only digital?

Is Selling Books The Only Validation Authors Seek? 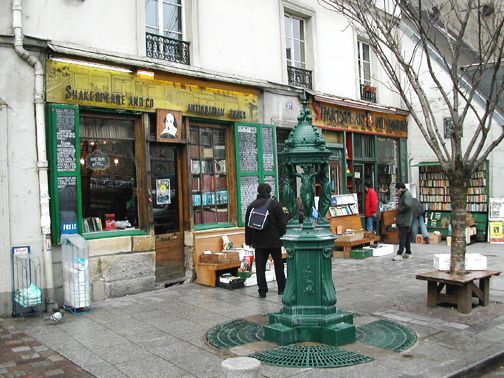 Still, most serious writers are Way  more concerned with writing books than selling them.

That seems true even in this new era of self-publishing.

Do authors still crave seeing their books in a brick-and-mortar store?

But, bottom-line, selling enough books to begin a chain-reaction of word-of-mouth sales is still the most sane endeavor, even if selling that “seed-stock” takes a long time…

I came across an article by David Rory O’Neill that reminded me about a post I published back in May of last year—What About All The Authors Whose Books Don’t Sell Very Many Copies?

“Tobias S. Buckell is a New York Times Bestselling author. His novels and over 50 short stories have been translated into 17 languages and he has been nominated for the Hugo, Nebula, Prometheus and John W. Campbell Award for Best New Science Fiction Author.”

Tobias, in the quoted article, said:

“Making a living off art is hard.

“But that isn’t a sexy sell.

“That isn’t to say you should give up. Fuck that. But I am going to say: get ready to work, don’t expect riches. Focus hard on the art….

“There’s a lot of snake oil sales going on. And a lot of well meaning people who won the lottery telling everyone to go buy lottery tickets while financial advisors shake their head.

“Pretty much the same as its always been…

“PS: this survivorship bias also works for writing advice about ‘how to write’ if you think about it…“

So back to that article by David Rory O’Neill—Opinion: Empowered by Self-Publishing, Still Seeking Self-Worth.

A few words from David:

“For me, success began when I stopped beating at the gatekeepers’ doors and taught myself how to self-publish properly. I found an editor and a designer, and I clawed my way to getting the books right. I was empowered by the creative freedom I’d found.”

“I consider I have been successful artistically and I’m proud of the work I’ve produced, but that success is tainted by the feeling that until I break out of the lower reaches of obscurity I occupy on Amazon and Smashwords, then my success will always be incomplete – lacking the final thing that removes self-doubt.”

Perhaps David and Tobias might have a nice chat…?