Earth-like Issues In An Alien Story . . .

This post is part of the new Friday series: Behind The Scenes of the story Notes from An Alien.

If you want to avoid having “spoilers” intrude on your enjoyment of the book, just grab a free copy and read it before you dive deeply into this series of posts—the book is short… and, deep…

Still, one of the main characters of the novel (who I also consider my “co-author”) says, right at the beginning:

“This is a tale that spans a large tract of time: from the horrific 500-year war to the immaculate peace—a peace we feel will never falter since we so often stumbled, fell, and rose again on the road we had to create to find that peace.”

How they get there is quite another story :-)

There are many things to say about the symbolism of Notes from An Alien and one of our most devoted readers has me working on a special post.

Today, though, I want to increase your understanding of the breadth of the story…

Shortly after Notes was published, I read through it again to extract the Principles addressed.

I used that list to begin an event on Book Island in the virtual world Second Life.

Many months of sessions saw people from around the globe gathering in the same virtual space and discussing issues drawn from the struggle the Angians in the novel went through; yet, nearly all of those people never read the book—the issues and principles are quite easily transferred from the Angi Star System to Earth.

That group on Book Island has matured; gone through a further six months of in-depth discussion of yet more considerations bearing on Global Peace; and, has recently transformed itself into a self-organizing group—an association of people from many countries, exploring new directions in aiding a culture of peace…

So, here are those issues and principles we took such care in researching, the numbers being the chapters of Notes from An Alien in which they feature strongly:

How Does Corporate Greed Keep Our World from Global Peace?
1, 2

How Does Corporate “Control” of Populations Keep The World from Global Peace?
1, 2, 4

How Do Religious Wars and Strife Keep Us from Global Peace?
1, 2, 3

Exploring Some of The Prophetic Predictions About An Age of Total Peace and Security on Earth.
1, 3, 5

Is Constant Materialistic Expansion A Valid Path Toward Global Peace?
1, 2, 11

Does Military Control of Populations Ever Aid The Path Toward Global Peace?
2

How Does Corporate Ecological Damage Keep Us from Global Peace?
2, 4, 5

Just ReBlogging a post from two months before my short novel was published—working on the second book in the series and could well apply these thoughts to the third book—once all three are out, my Work will be nearly done…

I’m engaged in a discussion over in the forums of BestsellerBound about why the theme  of my soon-to-be-published book will make it hard to sell. 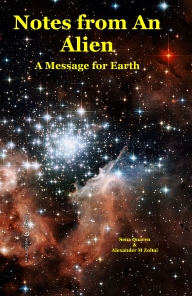 I knew as I planned and wrote it that it would be, at the very best, a niche-book–of interest to a rather small audience.

While I certainly didn’t even attempt to write it for the “general reader”, I do hope that some small yet significant group of readers will find it valuable.

It is a story, yet the Prologue says: “…this book is a story told in ‘notes’. Even though some readers may think it is a novel or a history, its form is difficult to classify in what are called genres.”

The working blurb I have is even more indicative of Notes from An Alien being a book that won’t appeal to a wide market: Start with a 500-year InterWorld War. Continue through ecological…

Earlier this month, I wrote a post called, World Crises And The Fiction Writer ~ Can They Help Humanity?.

Four days ago, I read Ollin Morales post, What Ever Happened to The Timely Artist? (which has disappeared since this post was first written… :-( .

“…artists aren’t willing to exert their power anymore, nor, I would argue, are they taking up the great responsibility conferred upon them to help people understand the mood, or at least tell people, simply:

In the words of Buffalo Springfield:

“There’s bad lines being drawn, / and nobody’s right if everybody’s wrong…  / Paranoia strikes deep, / into your life it will creep.  / It starts when you’re always afraid.  / Step out of line, the man comes / and takes you a-way. / Stop, now! What’s that sound? / Everybody look what’s going down!”

* Is fiction a proper tool for purposely proposing solutions to world crises?

* Does it go against some “law” of creativity to ask writers to make their fiction conform to some response to world conditions?

* What is the role in society of the fiction writer?

Another question I asked was:

“…can writers be more aware of how their work could include elements of plot or character or theme that, even if in a small way, contribute to a saner, healthier, more tranquil world?”

And, Ollin had said:

“My end goal is to give readers hope, strength and tools to get through a challenging age like this one. It’s not about whether I’ll succeed at this goal, it’s about whether I am trying to succeed. Because that’s my role as an artist in the world.”

The true beauty of blogging is the conversation the comments can become.

Here are some snippets from my readers’ comments:

“I’ve always been impressed with the TV show, Star Trek (the original). Gene Roddenberry challenged the society of that time to consider a world with social and ethnic diversity. It was a very idealistic story, at a time when equal rights was still in its infancy.”

“…now is not the time for writers to be silent. Oh, no. We must strive ever harder to put our words down in the hopes that it will benefit, comfort, and teach some.”

“Creative people are *not* obligated to be propagandists, and most are better off not trying to fill that slot. If nothing else, obvious propaganda has a very short life-span.”

“…I try to incorporate a sense of awareness of various issues into my writing. I should rephrase that. I don’t try to. It sort of happens without much (if any) conscious effort….I don’t know how I’d define humanity, exactly, though I do think it’s much more than a bunch of individuals. How we interrelate is vital. As a group, we can build up or destroy our surroundings and ourselves. Fiction can definitely play a role in awareness. Often, a fiction story has more power than nonfiction. The message seeps in while the reader is engrossed in someone else’s story. What better way to learn than to walk in another’s shoes?”

And, here are some of the comments about Ollin’s post:

“I really think one of the main reasons for books that address our current climate is that we’re sort of stuck in this MTV-era, where only the trendy material will sell.”

“…though I would say that visual art speaking to specific world topics isn’t as widely seen, I respectfully disagree with the overarching statement that artists are not producing this type of work any more.”

“As the world continues spiraling into the recesses of darkness, more and more artists will come out with a desire to speak the truth even if this costs them. Thank you for firing the first salvo to rally the troops.”

“What I do agree with is that the power to create a catalyst for change is in every artists hands.”

“It has taken me some time to realise that the truth must out, and the risks must be taken, if progress is to be made and we are to see ourselves in mirrors of clear reflection.”

I do hope you’ll go to both posts and read all the comments–Ollin and I respond to the comments–they are conversations.

As a writer, I want to help our ailing World; I need to help in whatever way I can…

There’s a Global Art Project called, Inside Out, that boggles my mind and cheers my heart.

Here’s a video of the originator of that project, explaining his wish to help our World.

I’m engaged in a discussion over in the forums of BestsellerBound about why the theme  of my soon-to-be-published book will make it hard to sell.

I knew as I planned and wrote it that it would be, at the very best, a niche-book–of interest to a rather small audience.

While I certainly didn’t even attempt to write it for the “general reader”, I do hope that some small yet significant group of readers will find it valuable.

It is a story, yet the Prologue says: “…this book is a story told in ‘notes’. Even though some readers may think it is a novel or a history, its form is difficult to classify in what are called genres.”

The working blurb I have is even more indicative of Notes from An Alien being a book that won’t appeal to a wide market: Start with a 500-year InterWorld War. Continue through ecological disaster and the decimation of populations. Follow the institution of a Worlds’ government that helps bring a glimmer of hope. Discover the challenges and failures of unifying three very different Worlds. Explore what it takes to give birth to a lasting peace. This is what reading Notes from An Alien promises. And, this story could help Earth…

I often have to battle feelings of rank stupidity when I compare what I’m doing to what popular authors have mastered. Of course I only feel stupid on the days when my work to promote the book has completely worn me to a quivering frazzle…

Still, I went into this project with clear eyes about what most of the reading public wants and what I felt I had to offer them.

Let me be painfully clear:

Our world is in grave peril.

People are regularly being lied to and manipulated by the powers that be.

The powers that be have no rational solutions for the multiple, global crises humanity is suffering through. They, essentially, could care less…

Most folks who love to read just want something to help them ignore the intense pressures of daily living and escape to worlds that entertain or “safely” thrill.

I’d better bring this post to a conclusion and go for a therapeutic walk. Let me end with a few more words from the book’s Prologue, the words of Sena Quaren:

“What I say next may or may not be believed but, either way, this story is true—true as fact or true in the way fiction can rise to heights unattainable by mere facts.