An Award-Winning Author and An Angry Book Critic

It’s often said that a writer should not respond to egregiously bad reviews and criticism. 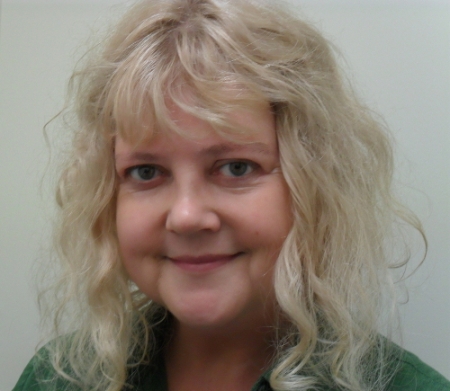 That’s probably good advice—usually because someone who can find nothing good in a book should, out of simple humanity, say as little as possible; and, no one wins in a heated argument.

It may be considered good form to let folks know you’ve struggled with a particular book and why you abandoned it, like I did in my July 10th, 2013 post.

But, if someone were to disagree with my estimation of a book, I certainly wouldn’t argue with them—any book can spawn a vast range of reactions…

However, there’s nothing wrong with a third party speaking up on the author’s behalf to render a bit of justice concerning their talents and wide-spread approval.

I’ve written about Paddy twice before:

To help justify my complaint about the Angry Book Critic, let me share a few accolades for Paddy’s three novels:

“The Factory did a rare thing: it turned an ingenious intellectual premise into a complex, gripping, flesh and blood story. It was full of ideas about history, art, ego and community, but these all emerged seamlessly from the pacy main plot.”
Australian Book Review

“The Factory, the first novel by Melbourne’s Paddy O’Reilly, revealed a writer with a facility for delineating the complex and often subterranean behaviours of the hidden self.”
Sydney Morning Herald

” … a line should be drawn under The Fine Colour of Rust as the pinnacle of the genre.”
The Australian

“At key moments, O’Reilly displays a deft poetic touch that elevates the prose from functional to transcendent… This is a story about love: where we look for it, what we do with it and how it shows up in the most unexpected packages. It is warm, moving and funny”
The Big Issue

“The Wonders, O’Reilly’s third novel, is a surreal and exotic thing, a finely wrought interrogation of the ways we navigate being human and the presumptuous shambles we make of much of it.”
The Australian

“O‘Reilly has a light touch when it comes to irony, allowing her to explore themes of difference, disability and celebrity in a way that is both playful and profound before changing gear and ramping up the psychological tension… O’Reilly pulls off a unique brand of magical realism with flourish.”
Booktopia Book of the Month

It’s that last book, The Wonders, that recently received some undeserved vicious criticism…

And, just because Paddy’s books have received such great reviews doesn’t mean everyone loves them…

Ms. Hardy’s About Page has two things that enlightened me about her reaction to Paddy’s book, The Wonders:

When referring to her own collection of essays (Ms. Hardy that is), she says, “…you can probably read all about that shit on the front page of this website.”

Why is she being so self-dismissive? And, what could that portend about her judgements of others?

She also says: “She makes host Jennifer Byrne’s life an abject misery once a month on the ABC’s First Tuesday Book Club.”

It’s precisely an appearance on that T.V. show when Ms. Hardy becomes venomous about Paddy’s book…

Until November 6th, you can watch a video of that show or download it to watch later.

There are three other people on the show, all of them supportive, to some degree, of Paddy’s book, as is the host…

Yet, Ms. Hardy isn’t content to say she dislikes The Wonders, she’s more than willing to zealously argue with everyone else…

Ms. Hardy’s first egregious comment: “This is a terrible book.”

The audience immediately laughs, which to me says something about why someone like Ms. Hardy is included in a serious book discussion—folks sense she’s a ringer, not to be taken seriously…

Some of the others try to mitigate such brash appraisals (and, there are many more), to no avail—Ms. Hardy is correct and the rest of you be damned…

And, to “justify” her remarks (using a thinly-veiled insult about Paddy’s character), when mentioning she might run into Paddy on the streets of Melbourne, she says, “She’ll punch me in the face.”

So, since Paddy wasn’t on that show and, since I doubt she would ever want to say a word to Ms. Hardy (let alone punch her in the face), I thought it would be helpful to share a video of her talking about her own book:

I just finished with three books—completed two, couldn’t get through one…

The first was by a friend of a friend—The Fine Colour of Rust by Paddy O’Reilly. 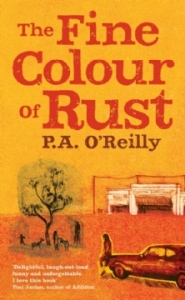 Some may be able to force it into a genre but I feel it resists easy classification.

My ultra-short review is:

I completely enjoyed the read and learned some important truths…

The second book was selected at a drug store by cover image, then back blurb.

This is a self-professed genre book—a Love Story…

At First Sight by Nicholas Sparks. 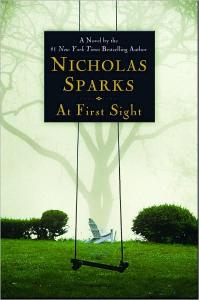 This book is just one of Sparks Bestsellers and it doesn’t take much Googling to find out that most “bestsellers” are books heavily manipulated by publishers and the media to sell many copies in a short time.

Just before I knew I’d write this post today, I got a link from a share on Google Plus:

“The Casual Vacancy by J.K. Rowling topped that list, followed by Fifty Shades of Grey by E.L. James.”

In Sparks’ book, the relationship was so shallow and “modern” it had no blood pulsing within it.

The motivations of the characters made them seem like puppets for some social strategist.

I hate putting books down but, for me, this was a loser… 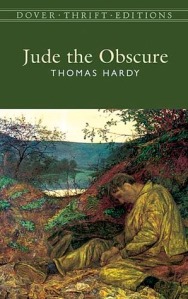 because of the cover first, then the author’s name, then the low price…

Jude The Obscure by Thomas Hardy.

Hard to describe this book…

A complex tale of Love.

A reading challenge because of the late 1800s prose but, once the “translation” part of my mind kicked in, it was an enjoyable read.

Received much scorn and vilification when published—a bishop even burned a copy.

Was the last novel Hardy wrote—he switched to poetry…

Do you compare your reading experiences?

Have you ever abandoned a book?

Some folks have the same best friend for their whole life; some have serial best friends, as life swallows or absconds with people…

Or. perhaps, all authors seem strange to you, even if you like some of the books they produce…

One of the strangest things for me is finding in another author’s words the sensations and feelings I thought were internally unique to me.

She’s won many awards and published both novels and short stories.

My best friend sent me a link to an interview in the literary journal, Verity La, called, Snapshots of Truth.

The tone of the piece made me feel like I was at a Cafe table with Alec Patric and Paddy, listening to their high-level literary chat.

Paddy said a number of things that startled me because of the powerful way they resonated with my own experience:

“Not that I’m saying I sit around waiting for the magical moment to arrive, that moment of the plunge into a half-lit world where stories come from…. impossibly, I feel myself sinking and when I return to normal consciousness I find I have caught hold of a story and pulled it back up with me.”

“People often talk about what is ‘left out’ of a story but I think that rather than leaving things out what we must do is allow the words in the story to carry the weight of the lives contained in it, even when not everything is explicitly described.”