Tag Archives: Not writing a book

A Topic Guide to My Very Strange Book…

Since I’m only committing to Monday, Wednesday, and Friday blog posts, I’m allowed to post more often if I just can’t help myself :-) 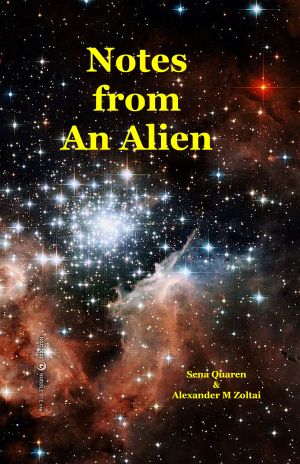 About 20 minutes ago, I was sitting here watching the news and something made me think about my book—the one I decided I won’t write…

And, in case you missed it, my prime reason for not writing a book I’d done massive research on was that my last novel essentially said it all…

Well, first, imagine three planets in a different Star-system—one completely corporate, one completely religious, and one inhabited by a True Alien…

You can grab a free copy of the novel; or, if you really have to, you can buy a copy :-)

So, since I just reassured myself that a book I’d already written has everything I need to say about certain topics (at least in fictional form…), I thought I’d share what those topics are…

The numbers in the following list are the chapters where the topic is predominant:

Like Loading...
Uncategorized free book, Free Novel, Not writing a book, Notes from An Alien, Sci-Fi, science fiction, Sy-Fy, SyFi, Why I didn't write a book

Are There Wrong Reasons to Write?

Leave a comment Posted by Alexander M Zoltai on June 10, 2015

I was lucky—or my Muse was in hibernation and woke up suddenly—discovering I had a wrong reason to write that particular book, just before the actual creative process of typing out the words of the story…

But, what if you’re a person who’s considering becoming a writer (or, perhaps, someone who’s already written a few things) and wondering if you really want to commit yourself to the profession?

I consider it rather synchronistic that, right after I wrote the post here that declared my intention to not write the next book, I discovered another blog post called, The Wrong Reasons to Write.

The blogger in question is Jeff Goins—take a look at some of these opinions about the man:

“Jeff’s blog is a bastion of great, realistic, helpful writer advice for those longing to pursue their dream of publication.”
—Mary DeMuth // WriteUncaged.com

“My 4-year old just saw a picture of Jeff Goins and said, ‘Hey, isn’t that Luke Skywalker?!’”
—Some dude on Twitter

Jeff begins his post with a Calvin and Hobbes cartoon, followed by four Wrong reasons to write:

You want to be heard.

You want to be famous, to make a name for yourself.

You want to impress people with big words and sound smart.

You want to make a ton of money.

I agree with him that it’s a wrong reason to write to be heard since no one may want to listen.

Writing to be famous? Personally, I feel doing anything primarily to be famous is fraught with more problems and burdens, psychological and practical, than I would care to endure.

Some may think writing to impress folks and seem smart wouldn’t be much of a problem since writing is such a humbling process—except for those who follow a formula, think like a marketer, and also dream about the last wrong reason to write—make lots of money. Making lots of money isn’t bad, per se, though it can be a tremendous burden; still, becoming rich as one’s motivating reason for writing would certainly, I feel, distort the writing…

You have something important to say.

You want to make others feel understood, like they’re not alone.

You want to make a difference with your words.

You want to teach the world something it wouldn’t otherwise know.

Again, I’ll share a few of my opinions; but, do go read what Jeff says.

Having something important to say is a great reason to write—it could power your efforts and help you penetrate all sorts of common obstacles writers can encounter—still, determining what’s “important” is quite a feat all by itself…

Making others feel understood in your writing implies, at least in fiction, creating characters who readers can empathize with—though, this can be done through both “good” and “bad” characters (both of which should “grow” as the story develops).

“Making a difference” with your words seems a close cousin to having something “important” to say—if you don’t or can’t find something truly important to write about, you may make no difference at all…

I certainly wish there were more writers who could do this…

Part of my belief system is being convinced the world will inevitably have more writers who can generate knowledge and share it—they may be young now, searching for the few writers who’ve already taught the world—you may be one of them………

And, for those who don’t like to take links out of blog posts, I’ll list Jeff’s final points (do, please, though, make an effort to go read his words.):

What if instead of making it about you, you focused on others?

What if you made the reader the hero, helping her feel understood in a way that she’s never felt before?

What if instead of focusing on the bottom line, you paid attention to impact?