I met Fatima very recently and haven’t, yet, read any of her works {since this was published, I have begun reading her…}; but, from her profile on Wattpad, her presence on Twitter, and her WebSite, I deduced a critical quality for writers—an independent power of creativity…

Let’s get this interview in gear…

> So, Fatima, want to tell the folks your a.k.a. and what you consider your writerly function? And, a bit of Bio would also be very nice… 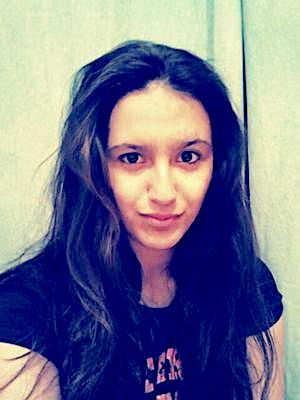 Moonshine Noire is the a.k.a. and I’m a poet/writer.
I was born in the foggy town of Southport in (Merseyside) North West England where I’ve spent just over half my life. The other half I spent in a beautiful town called Hammamet in Tunisia, my parents’ homeland, giving me an in-depth understanding of cultural differences and the beauty of diversity. I’m multilingual as a result of the move and reasonably better off for it (the Jasmine Revolution inspired quite a few poems and articles from me).
I’m an adult science student (won’t go into details).
I spend most of my rare free time walking about aimlessly in secluded woodlands/beaches or obsessing over art, music: classical (listening to Fauré right now), rock, swing, blues…, or in awe over everything macabre. I mostly write and publish online though I have been offered a few official publishing deals that I’m still considering. I suppose I could write a book about my life story so let’s keep it brief and stop.
> When did you start writing?
I’ve been writing for as long as I’ve known written words, my earliest recollection of writing is when I was six years of age. I still write pretty much in the same genres as I did back then: fantasy, adventure, sci-fi, mystery… Anything interesting or unusual. I started to write poetry about a year after that when my teacher started to read poems to us in class. I stopped writing for a few years from 11 to 14 years of age but since then it’s an inescapable necessity for me. That is when I’m not plagued by the notorious writer’s block.
> What would you say are your writing inspirations or “muses”?

I have been cursed with an outrageously wild imagination. I’m that person who seems to space out once every ten minutes. I escape to the confines of my own maze of fictional worlds in order to make sense of the literal one we live in. Everything inspires me in the way that nothing really does (does that make sense?). I’m mainly driven by my thoughts as opposed to experiences or images etc. My poetry is probably the most inspired thing I write. I draw from everything for that. For me, poetry is the pulp of emotion and the beating heart of artistic expression. What you can’t express in any other way, you can almost always count on poetry and the plethora of words in all the languages of the world to help you out. From the teasingly short Haiku to the tediously strained Epic, something is bound to work!
I mostly write ‘for myself’ and by this I mean I don’t try to please the reader or write exactly what seems to be popular or trending. I hate insincerity. The only point in writing is to be genuine and honest to yourself and to others. You owe it to the reader to show them what you want to show them rather than what they think they want to see.
> So, Moonshine, who are your favourite writers and why?
I have been mad about Oscar Wilde since reading The Picture of Dorian Gray, The Ballad of Reading Gaol, and The Importance of Being Earnest. He’s so sincere in what he wants to say even when he’s being humorous.
I also have a soft spot for Franz Kafka because of his brilliant incorporation of the bizarre and fantastic with the real. I pretty much thrive in his surrealist humour and agonised satire.
One of my many aspirations is to write a novel with a Kafkaesque feel to it…
This wouldn’t be a list without Fyodor Dostoyevsky. I don’t feel this one needs an explanation.
Sylvia Plath also needs no introduction. I also admire the works of William. S. Burroughs and Jack Kerouac. Charles Baudelaire is a big inspiration of mine. Arthur Rimbaud and Paul Verlaine, too.
Taha Hussein, certainly!
> Living writers, you say?
Haha, alright. Sarah Waters, J. K. Rowling, Nawal El- Saadawi, Julian Barnes…
This list looks so short compared to what I read!
> Lists are like that… :-)
So you do most of your writing on Wattpad—what’s that like for you?
I discovered Wattpad in September 2012 and I haven’t looked back since. I’ve gained the trust and comradery of quite a few Wattpaders, it has helped me grow in confidence and explore my technique. I have learned a lot from my fellow users and I hope they have learned something from me too!
It is a fun way of communicating with the reading world and it helps that it’s free!
I only use the website because I haven’t used a mobile phone (cell phone in America?) in a couple years out of my own way of avoiding unnecessary distractions but it is enough to keep track of things.
If you want to read or write, Wattpad is a great platform.
> And, you’re a great person to interview! Thanks for taking the time to give my readers an introductory view of you and your writing…
~~~~~~~~~
Here comes more info and important links to Fatima’s work:

“Time travel exists, ghosts are real, and magic isn’t an illusion. Forget everything you are told to believe, believe what you see.”
Summary:
Sara, a young girl, finds herself in an underwater kingdom where everything she ever dreamed of finding comes true. However, with the good comes the bad.
Can she help restore balance to Atlantis and end the tyrannic dictatorship of the sea King by rescuing pirate ghosts and fighting alongside mermaids?
A fantasy story for all ages available on Wattpad.

The Portal of Deceit:

An underrated physicist disappears, leaving behind only rumours of his whereabouts, he returns with inventions from another world passing them off as his own. Soon he becomes a billionaire and his multinational corporation tops every other on Earth for its massive advancements in technology and science.
Wormholes, political corruption, billionaire liars, energy-generating crystals, and a foolhardy escape plan. What could possibly go wrong?
A science fiction novel for all ages available on Wattpad.

Sailing On A Sea of Moondust:
A collection of Haiku and Senryu about philosophy, art, emotions and nature. Fun, quirky and unusual.
Visit her on Wattpad — You’ll find 39 additional works from Fatima there :-)
Check out her Author Site
Read some of her Flash Fiction
See what she’s doing on GoodReads
I will create a space in my To Be Read list for this woman :-)

Headphones Recommended for The Following Videos
One Love
Heal the World
How ’bout a little Jazz…
Amazing Young Drummer
A bit more Jazz…
And… That young drummer when she’s just a bit older…
%d bloggers like this: