“OH, My! Storytelling is much too serious to be taught through games!” 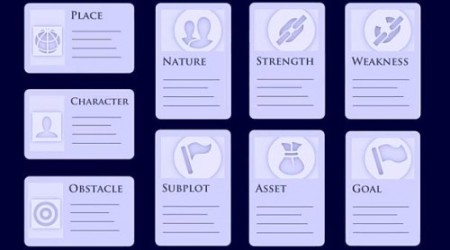 That last sentence is from a character I created, in a story I might write, who has overblown ideas about the “sanctity” of stories…

Certainly, storytelling is Important; but, if a game can help youth learn the subtleties of telling a story, Bring On The Game!

I’ve written before about Storium—“It turns creative writing into a multiplayer game and lets you tell any story that you can imagine.”

If you want to try playing Storium <— take that link :-)

I’ve been playing a game in Storium—writing a story in Storium—with two friends—writer and publisher, Ali Noel Vyain, and author Jane Watson.

Storium is still in Beta and very soon to be in Gamma—fully-developed—with hundreds of pre-sturctured story-games to play-tell; and, fully customizable to play-tell whatever you and your friends can imagine…

And, most-excitedly, they are in beta-testing with a version for youth—Storium for Schools.

From a recent email update from the Storium Team:

“ENnie and Origin Award-winning game designer Leonard Balsera has joined our team as project manager for Storium for Schools. As one of the designers of Evil Hat Productions’ popular and respected Fate roleplaying system, Lenny has seen first-hand the power of games to inspire players of all ages, including those in the classroom. He’s passionate about Storium’s educational potential. In fact, it was Lenny who convinced us to “go for it” and make education one of our areas of focus.”

“Under Lenny’s guidance, we’ve just completed our first official trial of Storium in the classroom! Nearly 100 students at Manor New Technology High School (located just outside Austin, Texas) recently played Storium as a part of their sophomore World Civilizations class. Through gameplay and storytelling they internalized and demonstrated what they had learned about ancient river valley cultures.”

Check out what the youth who played-wrote have to say :-)