This discussion began on November 14th, and continued on Nov. 16th… 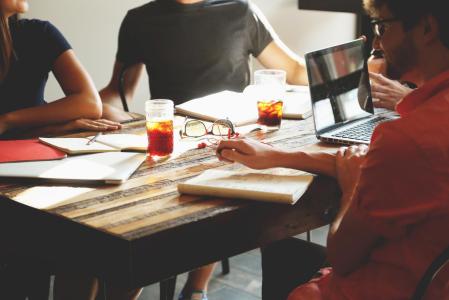 → Today’s first commenter, a regular here and from Australia, is an accomplished author and creator of virtual worlds:

“Over the years I have been in a number of writers’ groups. The first one was led by a published author, whose writing class we had attended. In this group we read our work out loud. However we did not provide a written copy of the work to help others follow the reading and now, in hindsight, I feel that was probably needed, if we wanted any kind of serious critique. Now I’m in a fantastic group of writers who have all been published, some extensively. We all take turns to send an emailed copy of the work we want to get feedback on (half the group one month and half the next). We read and edit the works with written comments on the emailed manuscripts, which we then bring to the meeting to discuss. Our meeting is usually held in a cafe. After lunch, where we socialise and catch up with our news, we get to work and discuss each submitted work in turn. We always try to honour the creativity of the writer and the value of their written work. At the same time we discuss the works in detail and make suggestions for improvements.

“The value of this approach is that it helps the writer, who may be too close to the work at that point, to get the perspective of other more detached opinions. It has been said that, after an initial draft, a writer should put a work away for a period of time so that when they return to it, some time later, they can see the work more clearly, warts and all. Having a ‘panel’ of experienced writers/readers to shorten that maturation time for the writer, with their considered opinions, is invaluable. But you do need to pick your ‘panel’. You need honest but non-destructive critics who take writing seriously :-)”

And, the current group has three critical activities:

Whether a group you might be in has all of those specific qualities or not, some form of “warming up”, “respecting”, and “close inspection and edification” are, I feel, important to consider as valuable group activities.

→ Our second commenter, a novelist and short story author, is a native of the Northern Plains of the USA and maintains his web site right here :-)

“I once co-founded and ran a community writers’ group in college. The experience was overall positive. I’d generally lead the discussions, critiquing a work by a member we were all to have read at some point that week. Once a month we’d do a writing exercise and then share the fruits of our rushed labor. Everyone enjoyed these writing sessions.

“I think the hardest part was simply not liking some of the writing. Sometimes one could see potential. Other times a piece was pretty good. Once in a while it was hard to give feedback for improvement because the group member’s story just didn’t feel at all inspired with even a grain of potential. Not only was it the hardest, but also the most dangerous part: trying to be truthful without being offensive. The best remedy I found was to ask lots of questions rather than jump right in with advice. If there was advice to be given, I had to get at the writer’s mindset first.”

Our new commenter has stated something that seems to me to be essential for writers’ group participants: using questions to hone in on the writer’s intentions before critiquing the writing, whether or not the work is “good” or “bad”…

What do you think about that last statement of mine?

For that matter, what stands out for you in either of our commenters’ experiences?

Are you in a writers’ group…?

What do you most enjoy about your group…?

Or, do you think you need to join a writers’ group…?

Or, are you sure a writers’ group would never fit your needs…?

Have you formed or are you about to form a group…?

What do you think is most important for a successful writers’ group…?