Leave a comment Posted by Alexander M Zoltai on October 20, 2014 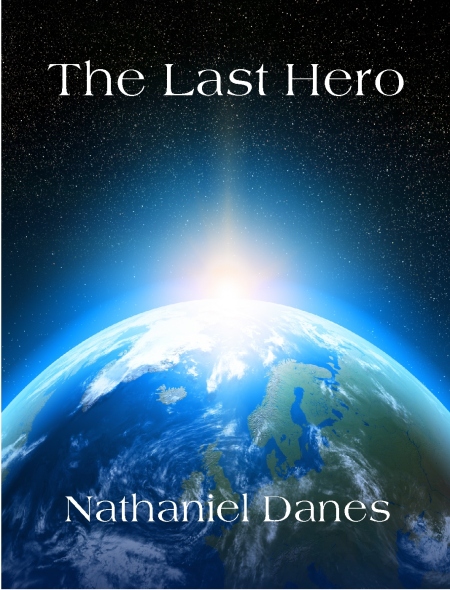 And, we have Nathaniel here today for an interview!

Welcome to the blog, Nathaniel. Please tell us a little about your newly released novel.

Thank you for having me, Alex.

The Last Hero starts off a couple hundred years in the future after first contact with a race of pacifists has convinced humanity to make peace with itself and disarm.

When we first met the hero, the last Medal of Honor recipient, he’s selling insurance for his father-in-law. A natural warrior, he’s made the best of a demilitarized Earth and become a dedicated family man. He gets drafted back into active service after a third race destroys the New Earth colony, forcing a crash mobilization.

As he travels the galaxy fighting the war, he struggles with the internal conflict between his lust for battle and his father’s-heart which just wants to be with his daughter. And, the law of relativity comes into play, to complicate things.

There are big space battles and large-scale ground engagements—keeps the blood flowing; but, it’s a deeper story than just action—explosion—fire fight—explosion—the end.

I understand this is part of a series or larger universe…?

Absolutely! This is book one of a trilogy. I’m already editing book two and have the third and final installment worked out in my head.

What inspired you to write this story, Nathaniel?

I’ve always had an over-active imagination. As an adult I use it as a coping mechanism to deal with my encroaching blindness. I’m losing my sight to a genetic disorder. To escape this depressing reality I like to drift off and let my imagination go wild. I watch and read a lot of sci-fi which helps to plant seeds…

Eventually, I worked this story out in my head and had to get it out.

Do science and technology play an important role in this story (or in your work in general), or is it secondary to the story-telling and characterization?

If forced to rank them, I’d have to say they’re secondary, though technology certainly does play an important role in the story. It’s just not as important as everything else.

Do you have plans to expand the universe in this trilogy?

I’ve toyed with the idea of doing another series in this universe, but it’s way too early to commit myself either way.

What advice would you give the aspiring writer?

Write and read and write some more.

For most people, myself included, it takes a lot of practice before you start to develop into a writer who people will want to read.

Also, find a friend who can read your work and give honest and educated feedback.

Lastly, don’t get discouraged. Success in anything rarely comes fast or easy.

Who’s your single, most influential author in science fiction and what impact have they had on our own work?

To be honest, I’ve only ever read one of his books, The Forever War; but, that’s what got me hooked on military science fiction novels.

Reading is a challenge for me and I used to read only military history. The Forever War changed that and set me on the path that led to writing The Last Hero.

Do you have any other projects in the works not in The Last Hero‘s universe?

I’ve actually already written the first two books in another series that will come out after The Last Hero series has concluded.

And, something I’m sure our readers will want to know—your website?

NathanielDanes.com. And, your readers can read the first three chapters of The Last Hero for free :-)

Nathaniel, been a pleasure—much success to you, Sir…